A few weeks ago, I purchased a Raspberry Pi. After reading Eben Upton's Book - Raspberry Pi User Guide, particularly the two chapters on which he focuses attention on the GPIO, I had an idea for my first project. The post covers the first iteration of a home temperature monitoring project I put together using a Raspberry Pi, a MCP9808 Temperature sensor, an old Mac Mini (early 2008), the InfluxDB time series database, Grafana time series visualization applcation, a bit of the Python programming language, and the runit init system. 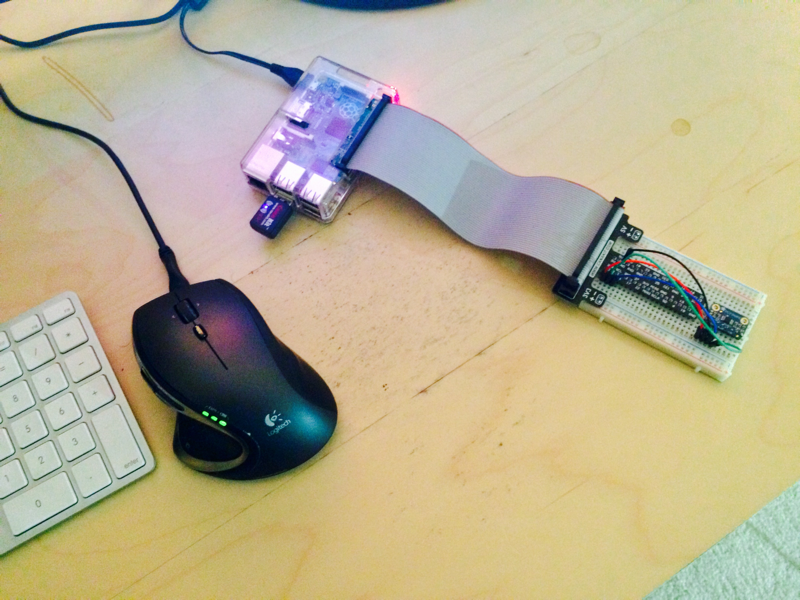 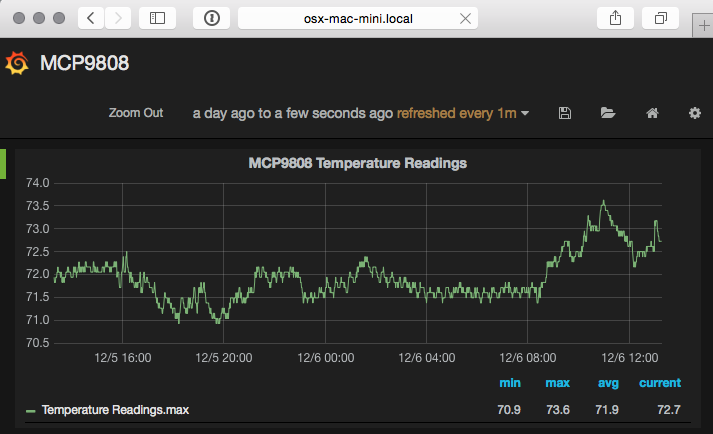 For this project I chose to use the MCP9808 Breakout Board from Adafruit - an excellent online resource for electronics components, circuits, and ideas. I chose this unit for a few reasons:

The MCP9808 Breakout Board ships from Adafruit mostly assembled. This particular kit requires only that you solder the included 8 pin header strip to the breakout board. 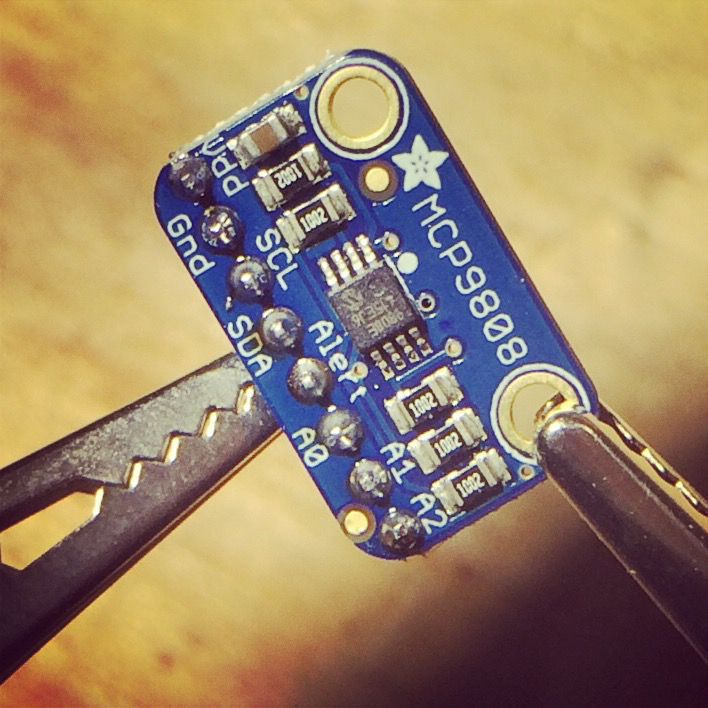 I used a Raspberry PI "Cobbler" GPIO Breakout from CanaKit and a breadboard to connect the Raspberry Pi to the MCP9808; this approach is a bit easier to manage, correct wiring mistakes, and less permanent than soldering the sensor to the Raspberry Pi. To read temperatures from the MCP9808, only the power pin, ground, and the I²C SDA and SCL pins are required: 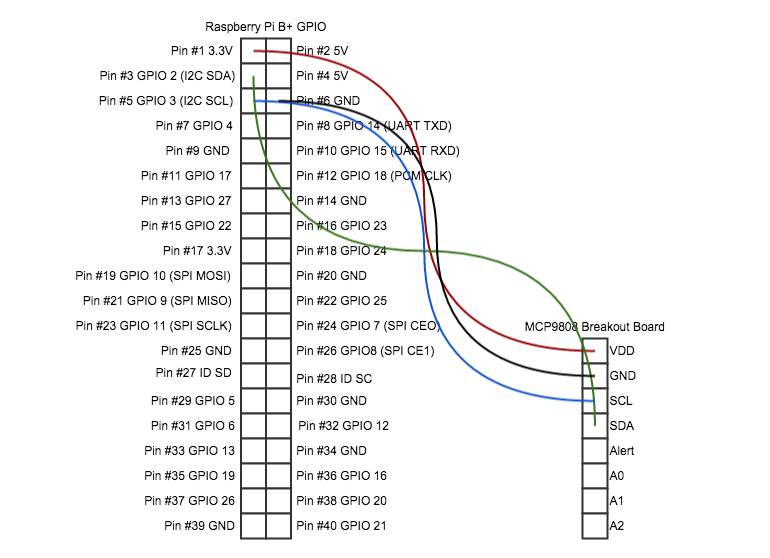 The remaining, optional, pins are not used in this project. They provide workarounds for I²C addressing issues when multiple devices are used on the same bus and a pin for alerting if the sensor reads a temperature above or below a threshold.

I knew that I wanted to back the project with a persistent datastore. This would allow me to capture data points and later analyze them for general trends, cross-reference heating/cooling patterns with weather events, etc.

I chose InfluxDB because of its time centric query language and storage model. I installed Influx on an old Mac Mini (Early 2009 with OSX 10.10) I had sitting under my desk. Getting a basic installation of InfluxDB up and running is well documented; since I already use Homebrew to manage most of my 3rd party dependencies and a formula for InfluxDB exists, installation was completed by issuing brew install influxdb.

With InfluxDB installed, I setup a database for storing my temperature readings and a database user to manage it. I used my InfluxDB instance's web console to do this; by default it runs on port 8083 of the InfluxDB host.

Now that the hardware and datastore are setup, there's a bit of OS configuraiton needed to an out-of-the-box Raspberry Pi in order communicate with the MCP9808 over the I²C bus.

By default, the Raspberry Pi does not load the required kernel modules to use the I²C bus. To enable I²C communication over the GPIO, I added the following two lines to /etc/modules

Then reboot the Raspberry Pi

After the system initalizses the system should be able to recognize the MCP9808 is connected. I used the i2cdetect cli tool to do so:

This will also install the I²C abstraction as the MCP9808 wrapper depends on it.

Next I wrote a little python script, poll.py, to read from the MCP9808 on an interval and report its findings to the mcp9808_test InfluxDB database instance.

Now it can be run using the following command; note that the script needs to be run as the root user of the Raspberry Pi in order to interact with the GPIO.

Horray! Everything was up and running... until I kicked the on/off switch of the powerstip under my desk. At this point I realized that I wanted to ensure that the poll.py script ran so long as the Raspberry Pi had power. To achieve this, I used the runit process supervisor.

Now the polling process can be started and managed by runit by executing the following:

ANALYZE ALL THE THINGS!

Well, now that the Raspberry Pi is reporting temperature readings every minute, it's time to start analyzing the data. As I mentioned before, I chose InfluxDB because of its ability to collate and aggregate time series data. For this project it makes sense to aggregate values of the degrees_f datapoints posted by the poll.py script for some given time interval.

For example, I like to look at the lowest recorded temperature readings for each hour over the course of a day. I might write a query to do this like so:

When a query is issued from the InfluxDB web console, the results are rendered in two formats. First, a graph of the data returned by the query is rendered; the X axis always represents time and Y axis the selected columns of the query. Second, InfluxDB renders a table of the datapoints matching the query and their timestamps. 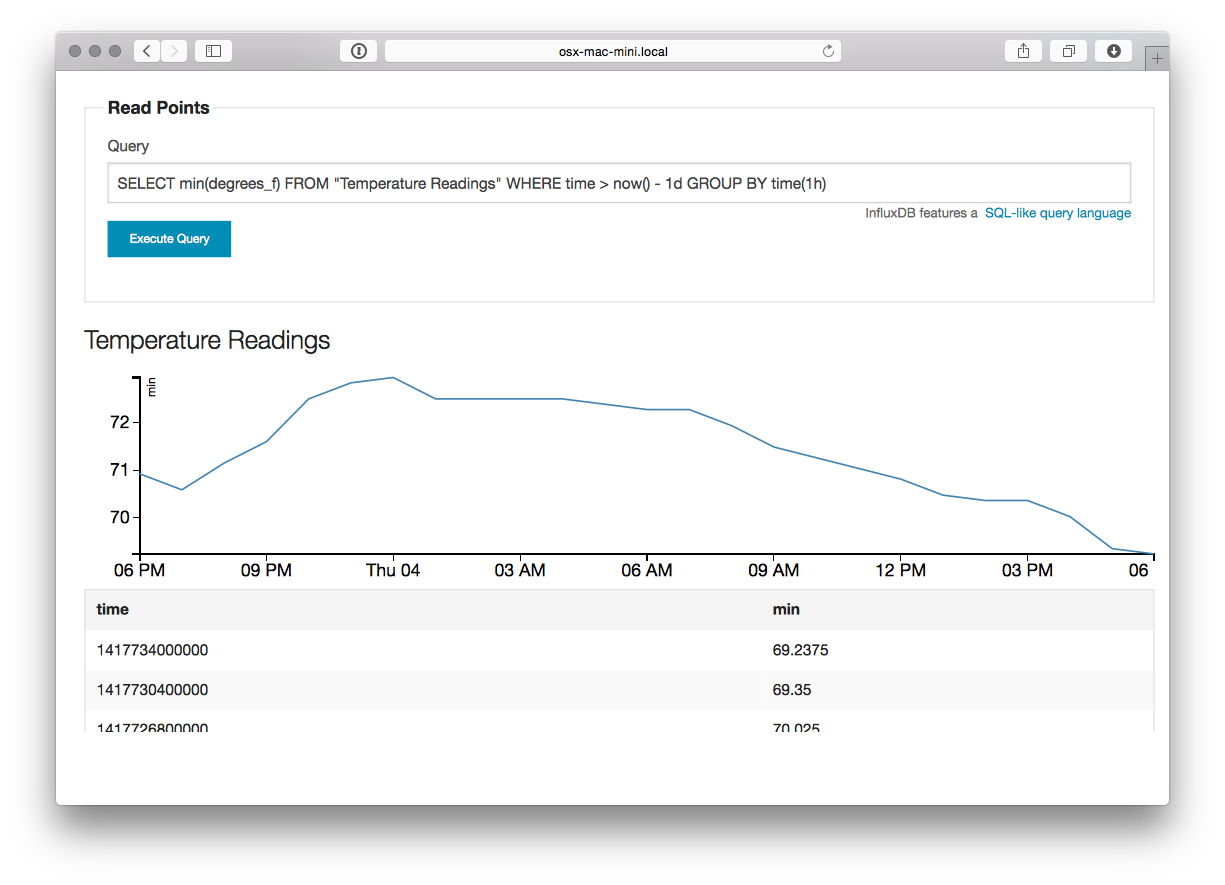 This is really good for point analysis of things like high, low, and average temperatures for a given time interval, but it's an entirely manual process. What I really want is to see this data over a rolling time window; indefinitely. This is where Grafana comes into play.

Grafana is written, mostly, in javascript. As such, it only needs a webserver to host it. I chose to run the Nginx Webserver on the Mac Mini as well. Nginx is fairly easy to install an configure on Mac OSX with homebrew:

Grafana is now available at http:/<nginx_host>/grafana

The last thing to do is define the grafana dashboard and use the datapoints from the Temperature Readings series of the InfluxDB.

And voila! An view of the Temperature readings for the last day that updates every minute.

It's kind of hacky, but for about $50 USD and an afternoon of research, installation, configuration, and coding I have a very crude implementation of a digital thermometer and a way to collate historical temperature data about one particular area of my house. Future iterations of this project will most likely include cleanup and organization of the poll.py script, infrastructure and security enhancements (I'd really like to build a web application inbetween the poll.py script and the datastore to add notifications of temperature events, etc), and the addition of a few more sensors throughout the house.